The plan was to visit the caves at Waenhuiskrans. The rain was not too bad and more like mist, but as rock climbing and stairs were involved, we decided to sit this one out and took Pieter and Marietjie with us for a drive through town. (Feroza will write about the caves). I knew about Kassiesbaai, but did not realise we would be going that way. All the stone-built houses were quite picturesque. After a short rest, we got ready to go to the Flames Grill and Pub in Bredasdorp. The rest of the group was all there. Kraai brought his wife, Karin, along, John and Edwina, Clive and Milly, and Heinrich were also able to join us. Arriving at the pub, Louwrens and Lizette were already waiting. Nice to meet them too.

Chris and Sandy surprised us with their sponsorship of the arranged entertainment for the evening. Their nephew, a young man with an exquisite voice sang our favourite songs and was entertaining the group until near curfew time.

Our food arrived, big portions and very well prepared. Some articles were auctioned and recognition was given to deserving members. Then the dancing started with a lot of members joining in. We older people left after a while, with the ears not being so young anymore. Shortly after getting to the hotel and settling down with something to drink, quite a few of the others joined us. We chatted away until it was bedtime.

The end of a very enjoyable weekend. Thanks to everyone who had a hand in organising it.

Despite the overcast and rainy weather predictions a few adventurous members decided to brave the weather and visit the Waenhuiskrans caves on Saturday morning. 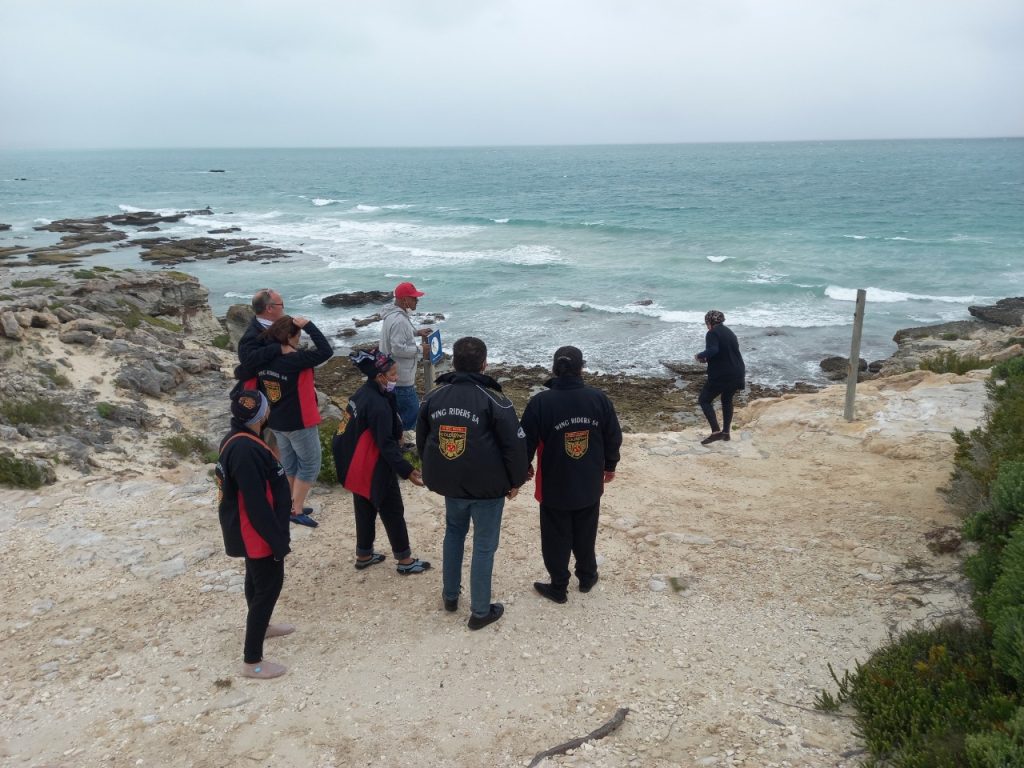 We had an early breakfast so that we could leave the hotel at 08:30 for a short drive to the parking area at Roman Beach. The road to the caves is definitely not suitable for Wings so we carpooled. Some of us walked along the dunes while Boet was able to easily navigate the boulders with his Ford thunder!

Igsaan explained the history of the caves and the origin of the name. Arniston is named after the ship the Arniston transport which was tragically wrecked in 1815 with the loss of many lives. Arniston is also known as Waenhuiskrans (Wagon house cliff). It is the only town in SA with two official names.

We walked comfortably for about 15 minutes and then scrambled down a limestone slope and walked along slippery rocks till we eventually got to a small opening that lead us into the large cave. After allowing our eyes to first adjust to the dim light a spectacular sight awaited us. True to the name this cave is huge and locals believed that a wagon with oxen could easily turn around inside this cave. The cave is only accessible at low tide and our timing was perfect. The water in the pools inside the cave was crystal clear and full of life- we saw colourful anemones, feather duster worms, klipvissies and two species of blue bottles.

We then decided to walk back up and traversed the dunes till we got to the Baken which is an obelisk-shaped concrete structure that warned sailors of the underlying reefs. It is here that we saw the ingenious method of fish traps that the earliest inhabitants of the area used to catch fish. A few of the guys went down to explore and see if there were any fish that they could braai for dinner but this was not to be! We also explored the shell middens on the dunes- a definite sign of the earliest Homo Sapiens who lived here and who foraged from the sea and cooked their food on the dunes.

By this time the weather had turned nasty and all of us except Doc and Kenny decided to hitch a lift back with Boet – 10 adults in the Ford! Doc and Kenny are super fit though as they arrived in the parking area at the same time we did!

All in all a morning well spent – big thanks to Igsaan for leading the group safely!

For more photos of this event, please click HERE.